I have been thinking over the last few weeks about the unveiling of the Tesla Powerwall and its potential in the United States. And it seems that, while neat, it's somewhat useless as is. For it to truly pay for itself, one must live in a place that has variable day/night rates, and the difference must be enough for the battery to pay for itself over a reasonable amount of time, say 5-10 years. As prices drop, I can see this opening up to more areas of the country, but its initial purchasers would be those believing they are more environmental than what they actually are.
However, the introduction of these in a business environment, i.e. Wal-Mart, may make more financial sense as they use a large amount of energy during the day and can cut back sharply at night, allowing a bank of Powerwalls to cut costs with a reasonable payback time. All of which leads me to ask, why are we limiting ourselves? Why are we not integrating the two ideas into a larger system with a greater impact?

For example, can we not create a semi tractor that runs completely off of electricity? This is where many of you may skip to comment about the massive amount of energy required, far more than that of the Roadster, and storing that much energy is not feasible. But please, let me finish. Hypothetically, we build a semi-tractor with a large electric motor attached to a relatively mild battery, say double that of the Tesla S, so 170 kWh. The semi is attached to a trailer, under which are three more Model S-size batteries, weighing a total of roughly 3600lbs, providing an additional 255 kWh, and wired to the tractor. That is roughly 10% of the max weight a standard semi trailer can legally haul. For a company that hauls bulky items that do not come near the 34-40,000lb limit, this might be a feasible option.

But, that's probably still not enough to haul all that weight very far, and it's not designed to. Most of the energy required by a vehicle is during acceleration and traveling uphill. It takes far less energy to keep a vehicle moving on semi-level ground than it does getting that vehicle up to 65 mph. That is where the solar roadway ( 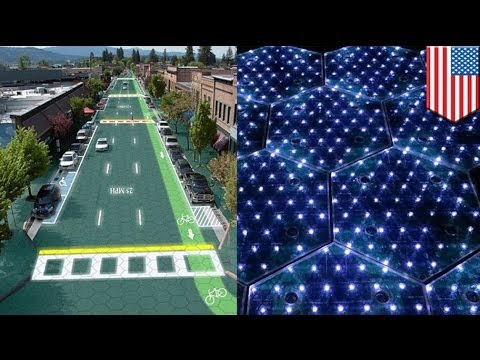 comes in. With an induction charger designed into the roadway , one could charge onboard batteries as you travel down the road. One could, in theory, recharge those batteries and save them for going uphill, passing, or pulling off of the highway to a charging station.

Multitudes of these semis on the road would lead to other helpful changes. Truck stops could be fitted with battery swaps for those that might need it. Rapid chargers could be fitted anywhere trucks might stop: truck and rest stops, along on-ramps, and at major shipping centers. Many of these shipping centers could be outfitted with Powerwall-esque battery stations that hold and distribute solar, wind, or conventional grid electricity to those semis overnight.

Anyway, those are my thoughts on it. Feel free to pick apart as you will…
0
«12»